So I got a Raspberry Pi for Christmas (thanks Secret Santa!), and I decided that I wanted to create a little retro gaming appliance with it.

First thing I did was install the NOOBS software that is recommended for first time Raspberry Pi users.

Next I googled for gaming emulators on Raspberry Pi. After grokking several forum and blog posts, I came across the RetroPie project (http://blog.petrockblock.com/retropie/). This certainly looked promising.

After going through the RetroPie-Setup scripts - I thought that I was almost home. So I started up emulationstation - a graphical frontend for all of the emulators. Once I did the obligatory startup of Super Mario Bros - I was sorta happy. However, I thought - keyboard controls suck. I want a game controller.

Being kinda cheap, I said to myself - “hey…my son has a bunch of game stuff up stairs…” - after digging though his gear, I found a nice GameCube controller.

I Googled for “GameCube controller raspberry pi” - which led me to this article.

I dug in a bit deeper and looked at how I would wire up this controller. This site describes the interface for the Revision 1 Raspberry Pi board. However, I needed a wiring diagram for the Gamecube controller so that I could hook it up.

This site had a nice description of the pins -

I was super excited at this point and figured I was 90% of the way there!

The modprobe command is a Linux command to load and unload kernel modules. The map parameter is described in the source code:

I also added this command to /etc/modules so it would be loaded at startup time:

There is a program for testing gamecontrollers hooked up called jstest - I ran it like this:

I clicked a couple of buttons, moved around the joysticks, and saw that the values were changing. So I figured I was done with the controller setup.

So I went back to google and started doing more research. Unfortunately - there wasn’t much information available. Nobody seemed to be having my problem, but there also wasn’t much discussion anywhere regarding the GameCube controller and the Raspberry Pi. I posted a question on the raspberry pi forums about this just to see if I would get a response. But being impatient…I wasn’t going to wait for the answer.

Hacking on the code

After digging around the file system on the Raspberry Pi a bit, I was able to find the source code for the gamecon_gpio_rpi kernel extension. It doesn’t appear to live in github or any other source code repository. Although there is a deb package that includes the source. If you’ve installed the driver with the RetroPie-Setup script, the source lives here:

It is managed with dkms - so hacking on it is relatively straightforward. So I started digging in a bit to the source.

After looking through the source a bit, the first thing that seemed incorrect was this:

The reason this seemed incorrect, is that there were a few articles written by other folks regarding the gamecube controller protocol. The consensus was that the command should be:

So I figured I’d start there and see where that got me. I copied the whole src as follows:

I setup a little rebuild script:

And I tried my change to the GC_GCUBE_REQUEST hoping that it would solve all my problems.

After rebuilding and loading the module I ran the jstest program again. It seemed to be working a bit better, but it still wasn’t as responsive as one would expect a controller to be.

I was honestly a bit stumped at this point. I double checked all my connections and couldn’t find any problems.

So I went ahead and brought out my trusty oscilloscope. Based on the description of the gamecube controller protocol from other articles - I expected to see a 24 bit message (23 + stop bit) containing the following:

So here was the capture from my scope. 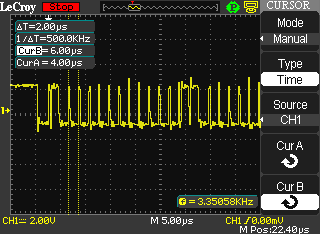 After annotating it with 0s and 1s: 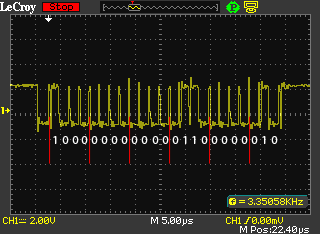 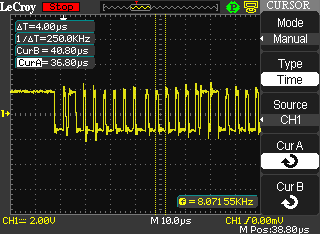 It measured at 4us - which matched what other articles I found while doing research. If the response was 4us per bit - then the command sent from the gamecon_gpio_rpi driver should match. So I measured the command signal from the Pi:

Doh! It measured at 2us. That doesn’t seem right…so I dug into the code that sends the command over the gpio pins:

So I decided I would fiddle with those values a bit to see if I could get the command to match up with a 4us duration per bit. After some trial and error here was the code I arrived to:

At a glance this didn’t make a lot of sense because the values aren’t clean multiples. I don’t have a good explanation for this at the moment.

But the capture from the scope showed that I had achieved a 4us duration for the command duration per bit:

So I ran the jstest - and all seemed to be working properly - the updates to the joystick and button data seemed to be good. However, there was something strange happening on the scope.

It seemed that the response was intermittent. It would rapidly jump between these 2 states: 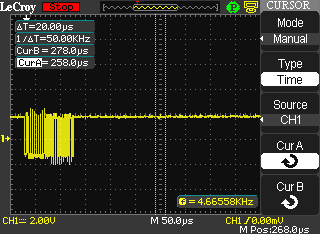 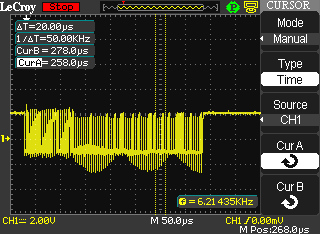 So based on my previous change to the other timing, I changed that code to this:

I suspect that the timing of the udelay has changed with various changes to the raspberry pi and/or Linux kernel. It appears that udelay supports resolution of about 500ns (.5us) based on my experimentation. However, this might change from version to version - or worse - it might change based on the load of the system. So I will have to do further testing with actual gameplay to see if this is going to work long term or not. Unfortunately - the raspberry pi running Linux is NOT a realtime OS.